The ADVENT Priest is a new ADVENT enemy introduced in XCOM 2: War of the Chosen. These ADVENT units use Psionic abilities to support nearby allies and disable enemies.

They are first deployed in late March. Advanced Priests replace the standard Priests around May and Elite Priests will then replace them from June and after. They act as replacements for ADVENT Officers as pod leaders.

The ADVENT Priest is an ADVENT unit, wearing pure white armor similar to ADVENT Shieldbearers, but with a more angular helmet to distinguish them. The helmet and pauldrons are adorned with a white and gold pattern.

They are equipped with a standard-issue ADVENT Mag Rifle and an Alien Psi Amp to use for Psionic actions.

The ADVENT Priest does not have a large number of abilities, but has one unique to it. The Advanced and Elite Priests gain an additional ability. 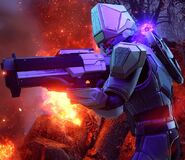