The ADVENT Turret is an ADVENT enemy encountered in XCOM 2. It is a stationary defense gun that is commonly found in ADVENT facilities on rooftops and defensive fortifications.

The ADVENT Turret is a robotic turret found mounted to ADVENT vehicles and facilities. It is primarily black and red colored, with a flashing electronic display along its barrel. The entire assembly is mounted on a circular, rotating mount. It is a stationary defense turret used to defend an area and to support ADVENT units. However, the unit is highly vulnerable to hacking by upgraded Gremlin drones; this allows XCOM to either temporarily shut it down or take control of the turrets and turn them on their ADVENT allies. Additionally; when successfully hacked during concealment the action does not reveal the XCOM operatives, and even if the operatives are later detected the turret isn't, potentially allowing the device to be ordered to spring a trap from an unexpected area. The weapon has a good degree of armor; reducing the impact of XCOM attacks and this armor along with the turrets health only grows stronger as ADVENT deploy more advanced versions of the turret. Said armor is vulnerable to shredding however.

The ADVENT Turret, like other ADVENT units, fires glowing red Gauss rounds from its barrel. It does comparable damage to an ADVENT magnetic rifle and due to its frequently elevated positions it may gain a bonus to its accuracy against a target, making it a very deadly Overwatch interceptor. Additionally, ADVENT Turrets can fire twice in one turn; while the AI sometimes does not do this, a hacked turret only uses one action point to fire. If Vipers are near a turret, a bound soldier counts as exposed and can still be targeted without harming the Viper; ADVENT Turrets can do up to 8 critical damage in this situation. If the player makes a Avenger Defense Matrix you will be able to play as ADVENT Turrets to defend the Avenger.

Note that in the Shen's Last Gift DLC, a specific variety of turrets appear: Decaying Turrets. These turrets are old, rusted, and appear heavily damaged. As a result, they only have 4 HP and a single armor point compared to the 2+ of a standard Turret. They may also pop up from floor panels. 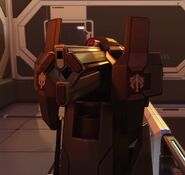 Add a photo to this gallery
Retrieved from "https://xcom.fandom.com/wiki/ADVENT_Turret?oldid=48101"
Community content is available under CC-BY-SA unless otherwise noted.