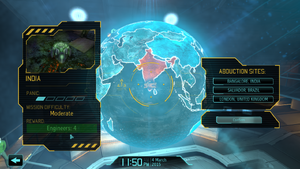 Alien Abductions is a mission type in XCOM: Enemy Unknown.

Alien Abduction missions offer a choice between two or three mission sites, typically located on different continents. Each site has its own difficulty rating and reward. XCOM can complete the mission at only one of the available sites, which leads to increased in panic on the continent(s) left to the aliens: panic is increased by 2-3 in targeted countries, and by 1-2 in the rest of the continent, depending on game difficulty (settings can be found in DefaultGameCore.ini).

When Abduction events are detected, in XCOM: Enemy Uknown XCOM has 30 hours to choose a site and start the mission before it is considered ignored and is no longer available. In XCOM: Enemy Within though, delaying the mission by any amount of time results in the mission vanishing (and panic level increasing in all 3 continents) immediately, at least on Impossible. If Iron Mode is a factor in this has not been recorded.

Countries that have withdrawn from XCOM are no longer eligible for Alien Abductions. They also do not occur in Council nations that have a satellite deployed over them on the first day of the month. (The game pre-selects nations for Abduction missions immediately following the previous month's Council report). For that reason, save satellite deployments for the end of the month (just prior to the Council report), or risk an abduction event in a country that already has a satellite. If there is only one Council nation without satellite coverage at the beginning of the month, no abductions will occur.

The number of abductions that occur each month, as well as the minimum number of "abductible" countries required for any abductions to occur, changes after the Alien Base Assault. Prior to the assault, there must be at least two valid countries (i.e., Council members without a satellite) at the beginning of the month in order for any abductions to occur, and if so, there will be two abduction events that month. After the assault, a second abduction event may or may not occur, but only if there are three or more valid countries.[1] Thus, after the assault, it is both easier to prevent abductions from occurring, and there are fewer abductions if they do occur, making panic levels significantly easier to manage.

Alien Abduction missions always take place in urban areas. The layout is randomly chosen from a predetermined pool of 25 maps (28 in XCOM: Enemy Within), which are all available regardless of the nation the mission occurs in. Of the 25 possible sites in XCOM: Enemy Unknown, seven are no longer used for abductions in XCOM: Enemy Within, and are replaced by ten new maps. Some of the maps are also shared with Terror Site missions.

Urban areas typically consist of tight spaces with a lot of cover and multiple obstructions. This makes them good for mobility and flanking. Some maps also have multi-level buildings. Having soldiers equipped with grappling hooks via Skeleton Suit or Ghost Armor can be helpful.

Additionally, these maps feature scattered alien devices which can be used for cover. Contrary to the mission brief, they are often found near civilians, who are encased in a green goo. As the civilians aren't moving at all, it may suggest that the goo induces unconsciousness or a state of paralysis to ensure easy abduction by the aliens. It is not possible to rescue these civilians during the mission, and what becomes of them afterwards is unknown. Conversely, the fate of successfully abducted humans is revealed during the Alien Base Assault.

Depending on the stage of the alien invasion, abductions can feature almost every alien species, excluding: Chryssalids, Ethereals, Outsiders, Sectopods, and Zombies. Although normally unavailable for this mission type, Sectoid Commanders may be present exclusively when accompanying a Mechtoid in XCOM: Enemy Within.

The number of enemies is determined by both the mission difficulty indicated when choosing an abduction site, and the game difficulty. Each enemy pod can consist of one to three aliens. In XCOM: Enemy Within the total number of aliens may vary from what is indicated below, as pods that normally consist of three aliens can be replaced with a pair of Seekers, or a Mechtoid / Sectoid Commander combo instead. XCOM's first abduction mission may consist of fewer enemies than usual.

Despite the suggestive name, the goal in Alien Abductions is simply to find and eliminate all hostiles. At the start of the mission, the enemy is present in full force, with some groups roaming the map. Due to these factors, it is preferable to advance minimally, always keeping to cover and using Overwatch at every turn. When enemies are encountered, it is preferable to engage them at maximum distance, to avoid discovering (and thus alerting) additional enemy groups.

Aside from alien corpses, weapon fragments, and weapons from aliens captured alive, Alien Abduction missions confer pre-announced rewards which can include credits, engineers, scientists, or a new, highly ranked, soldier from the affected country.

Panic is decreased by 3 in the country where the mission took place and is unchanged on the rest of the continent. If one of the other countries is in the same continent where you did the mission, the net effect is a panic increase of 1 for that country.

This expansion adds the following to this mission type: