Alien Entertainment is an alien artifact in XCOM: Enemy Unknown.

Only one Alien Entertainment device can be found. It is located at the Alien Base during the assault mission. Dr. Shen utters the computer game comment (quoted above) when it is discovered.

This artifact is not required for any manufacturing, research, or Foundry projects, and can be sold freely. 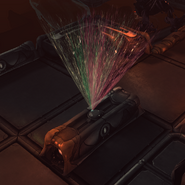