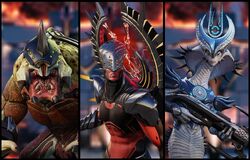 Alien Rulers are new enemies added to XCOM 2 through the Alien Hunters DLC.

The three Alien Rulers introduced in the DLC are: the Viper King, the Berserker Queen and the Archon King.

The player cannot encounter multiple rulers in the same mission. The first to appear is the Viper King, then the Berserker Queen and the last is the Archon King. The next ruler typically won't appear until the previous one is killed or successfully escaped.