Alien Surgery is an alien artifact in XCOM: Enemy Unknown.

Alien Surgery artifacts can be recovered following the successful completion of missions involving an Abductor or Supply Barge, and at the Alien Base during the assault mission.

This artifact is not required for any manufacturing, research, or Foundry projects, and can be sold freely. 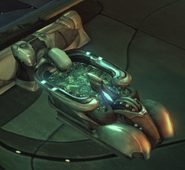