The Alloy S.H.I.V. is a weapon platform in XCOM: Enemy Unknown. It is an upgraded model of the standard S.H.I.V., with superior armor and the potential to serve as mobile cover for soldiers.

An Alloy S.H.I.V. armed with a Laser Cannon 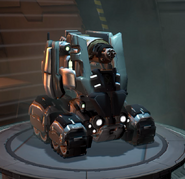