The Archon King, or Subject Alpha, is a special, and far more powerful, Archon alien.

He is the third and last Alien Ruler of the game. He also is the hardest to kill.

Like other rulers, he does one action after every action any XCOM squad member takes, during a special "Ruler Reaction" phase. 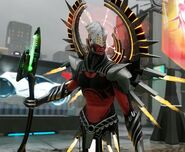