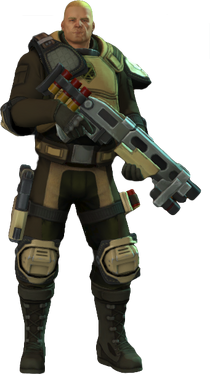 The Assault Class is a soldier class in XCOM: Enemy Unknown.

The primary role of the Assault Class is aggressive reconnaissance, flanking, and drawing enemy fire.

The first ones in... and the last ones out: be extremely wary of over extending with an Assault. Assaults are the definitive reconnaissance and close-quarters combat (CQB) unit, and will most likely be "pointman" in any given situations. Often the closest unit to aliens, it will be shot at the most. Based solely on quantity of fire directed towards your assaults, they can go down with frightening rapidity.  Consider giving your assault the best armor and HP boosting items available for this reason.  While in EU small movements with Overwatch could be used in all situations, giving the assault a solid base of fire to back him up, the addition of Meld in EW sometimes requires riskier movements that will see assaults alone, flanked, and shot.

The Assault class is the only class that has a choice between two types of primary weapons: shotguns or rifles. They use pistols as a secondary weapon.

When a soldier is promoted, some ranks allow a choice between two abilities.

Some players who have completed Ironman on Classic and Impossible difficulties recommend choosing Rapid Fire and Lightning Reflexes.

Lightning Reflexes vs. Close and Personal[]

Assault Class builds suitable for all difficulties and DLCs:

Trips Overwatch hot zones and flushes foes out of high cover. This allows for Advancing Cover and Squadsight kills.

Aggression will always give a minimum 10% boost to critical chance. If that doesn't kill the target, Close Combat Specialist will provide yet another shot should the target move(which if flanked will most likely move).

Allows Rifleman to excel in mid range shootouts against numerous lesser enemies or mind-controlling high-valued targets. The key point in this tactic is making excellent use of fireteam discipline.

Lightning Reflexes provides the flexibility to seek out good cover for this without fearing enemy reaction fire. Use Heavies to break cover and wipe out groups with a hail of accurate, medium damage gunfire from long range without having to flank and potentially alert extra groups.

The following is a detailed break-down of the Assault class stats and abilities in multiplayer mode.

Note: Each soldier class has a base cost of 800 points, which would need to be added to the values above to determine the point value of a particular build. The above point and stat values reflect the default (i.e. 0 point) equipment load-out.