This article is about the aircraft in XCOM 2. For other uses, see Avenger. 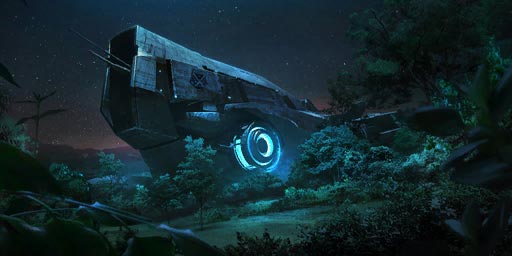 The Avenger is a converted alien supply craft that serves as XCOM's mobile base of operations, featured in XCOM 2. Formerly used by the aliens to transport large amounts of supplies, the vessel that would become the Avenger was recovered by the reborn XCOM crew, who quickly turned it into their new base of operations.

Though the ship remained grounded due to a lack of key components, preventing it from becoming fully operational, it nevertheless remained key to the struggle against the alien forces occupying Earth.

Following the rescue of The Commander, the reinstated leader of XCOM directs the organization's troops to recover an alien power core, capable of getting the ship off the ground. Following the recovery and installation of the component, with the Avenger flight-ready, the crew prepares to return to service once again.

Functionally similar to XCOM's original underground base, the Avenger utilizes an 'ant-farm' interior, where the ship's facilities and rooms are located. First requiring that the debris within be cleared, once empty, the various rooms of the ship's depths can be turned into facilities needed to fight the war against the aliens. Certain facilities provide bonuses to others, necessitating proper placement of these rooms, while some parts of the ship have exposed power wiring, providing either a significant boost to the ship's overall power output or a facility receiving power for free, depending on player choices.

A mission during the campaign revolves around defending the Avenger against attacking alien forces; the mission does not take place within the ship itself.

There are 12 rooms in the Avenger that can be cleared to allow the player to build additional facilities from the list below. Most facilities can be upgraded to provide extra output. The values for an upgraded facility are in parenthesis.

Concept art of the Avenger's Armory.

The Skyranger landing aboard the Avenger.

Bridge
Add a photo to this gallery
Retrieved from "https://xcom.fandom.com/wiki/Avenger_(XCOM_2)?oldid=49631"
Community content is available under CC-BY-SA unless otherwise noted.