Avenger Defense (War of the Chosen)

Each of the Chosen has an Information gauge representing how much they know about XCOM and how accurately they can predict their activities. This gauge rises as the Chosen interrogates soldiers on the field or kidnaps them for later questioning, but it will also rise over time even if they do not capture anyone. When the gauge reaches maximum, the Chosen can randomly decide to assault the Avenger in their territory and force it to crash-land, triggering this mission.

After completing the mission, the Chosen's Information bar is reduced significantly and they will have to build it back up to attempt another assault.

Unlike the regular Avenger Defense, a victory ends with XCOM in control of the battlespace; thus loot is collected. 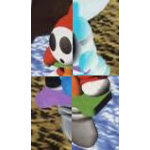