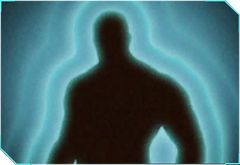 Bioelectric Skin is one of the Gene Mods in XCOM: Enemy Within.

Hidden enemies, either in the fog of war or cloaked, within a short distance are revealed with a vague bioelectric outline and grants immunity to strangulation.

This Gene Mod becomes available in the Genetics Lab after completing the Chryssalid Autopsy research.