Carapace Armor is a type of body armor in XCOM: Enemy Unknown. 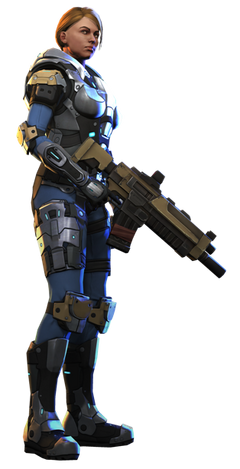 It may be self-defeating to invest too heavily in Carapace Armor suits. Purchase enough to serve immediate needs, but this armor will be obsolete before long, so the resources spent will only have short-term return. The exception to this advice would apply to higher difficulty games where the additional health point over the Skeleton Suit make a crucial difference between a squad member living and dying (see below) and where advanced research may not be possible due to the difficulty of obtaining materials.

On Impossible difficulty, the utility of the Carapace Armor is somewhat increased, due to its health bonus. Rookies on Impossible difficulty have 3 base health (with +1 from Body Armor). Combining 3 base HP with the +4 HP bonus gives 7 HP, which will allow any XCOM soldier to survive one (noncritical) shot from a Light Plasma Rifle, which has a damage range of 4-6. Since Thin Men and Floaters are the most threatening enemies at the time of researching Carapace Armor (usually during the second month), and both have increased Aim and use Light Plasma Rifles, the Carapace Armor is a good choice for a more defensive style of play. While the Skeleton Suit is more suitable for aggressive maneuvers, or for squads looking to take high ground quickly, it will not provide guaranteed survival for a Rookie or low-ranking Sniper facing down a Thin Man or Floater.

This armor is considerably more useful and valuable in a game where the 'Marathon' Second Wave option is enabled and/or when playing the XCOM: Enemy Within expansion as both feature increased research times for advanced technologies; this significantly extends the period of time in which Carapace Armor is useful and maybe in fact be necessary to combat increasingly difficult enemies.

Assaults with the Extra Conditioning skill make better use of Carapace Armor than most, as it adds +4 extra health instead of the expected +2 of medium armor, for a total of +8. 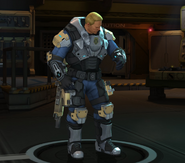 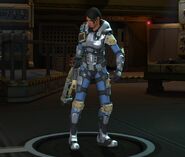 A female Assault in Carapace Armor.

A male Heavy in Carapace Armor.
Community content is available under CC-BY-SA unless otherwise noted.
Advertisement