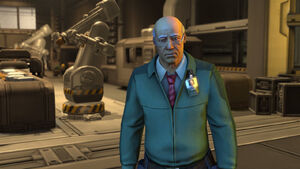 Dr. Raymond Shen is the Chief Engineering Officer attached to XCOM and oversees manufacturing, and base facilities construction.

Dr. Shen appears to be of Taiwanese descent and is older than most XCOM personnel, with balding gray hair.

Dr. Shen is the head of Engineering. He offers suggestions, and recommends what equipment and facilities should be built. During missions, he gives advice on previously undiscovered alien species, along with Dr. Vahlen. The units he comments on will generally be mechanical units such as the Floater or the Cyberdisc. He also comments on alien technology and artifacts, often informing the player of their intended use or warning of their possible threat.

Throughout the game, Dr. Shen displays some concern over the extent and application of the alien's technology. He is especially horrified by the extent to which some species of alien have been genetically altered, or augmented with machinery, and questions whether humanity is headed in the same direction. His comments are often contrasted with those of Dr. Vahlen, who seems far more interested in any new alien technology the team recovers.

In XCOM: Enemy Within, Dr. Shen helps unlock the secrets of Meld and advocates for using the substance to create augmented soldiers and develop Mechanized Exoskeleton Cybersuits (MECs).

While not present in XCOM 2, he is referenced particularly in relation to his daughter, Lily Shen, and the Avenger, his life's work following Earth's fall to the aliens.

Dr. Shen appears in XCOM: Enemy Unknown and is voiced by François Chau. He makes an appearance in XCOM 2 via video message.

Dr. Shen has a major supporting role in the novel XCOM: Resurrection. Dr. Shen went into hiding as soon as the council capitulated and has a base of operations on a pre-war submarine, called the Elpis. Dr. Shen and his daughter Lily support Amar and his squad with weapons and armor whilst they secure the Avenger, which according to him can resurrect the XCOM project. However, during the repairs the self-defense systems of the avenger are triggered, which awakens the aliens on board who had been put into cryosleep. Dr. Shen is wounded during the defense of the avenger, due to interrogation by the aliens. This, in combination with his already fragile health due to old age, makes him succumb to his wounds three weeks later.

In XCOM 2, Dr. Shen's daughter, Lily, has taken over the operations of the engineering department. Both Central and Lily mention XCOM's old chief engineer, with Central expressing pride in the daughter of his old colleague. He is first mentioned during the introductory cutscene when The Commander visits engineering, with Lily noting that her father gave his life to ensure the ship could work and that the vessel is his 'life's work'. From then on, mentions of the elder Shen come up at random, with a few reports related to mechanical enemies occasionally expressing Lily's presumptions on what her father would've thought of them.

Raymond appears once more during the events of Shen's Last Gift, of which he plays a large role in, despite his death some years previously. Apparently some time during the events of Enemy Unknown, he attempted to upgraded the XCOM Base's AI in the hopes of turning it into a sentient program, which was subsequently seized by ADVENT during the time after XCOM's fall and repurposed for their own uses. This AI went rogue and killed the alien personnel in the facility, dubbing itself Julian and electronically attacking the Avenger in the hopes of luring Lily to his location.

Over the course of attempting to survive against Julian's assassination attempts, Lily discovers a SPARK Prototype that Raymond had developed during the invasion, along with a video message. In said message, Raymond is seen in the Engineering section of the underground base, suggesting that a portion of it remained functional following the attack on the facility. In his message, he notes that if Lily is hearing it, then he is almost certainly dead. Grimly noting that with the attack on XCOM HQ and the Commander's kidnapping, what remains of the organization will not be able to hold the base much longer, he charges Lily with the task of reclaiming Earth from the aliens. Revealing that he built the SPARK for the purposes of protecting her, he signs off, with his final words expressing great pride in his daughter and that she is his greatest gift to the world.