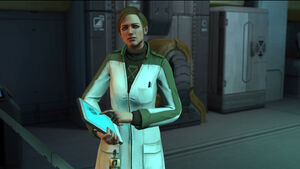 Dr. Moira Vahlen is the Chief Scientific Officer, an astrobiologist by profession, attached to XCOM who oversees the project's research laboratories.

Dr. Vahlen appears to be German (or potentially Austrian or Swiss) based on her surname and accent. During particularly tense moments, she has been known to exclaim in strongly accented German before lapsing back into English.

Following the tutorial, she introduces the Commander to the research laboratories and on occasion advises the Commander with some helpful tips about alien specimens and how to capture them, and also asks that explosives not be used so that materials and weapon fragments are preserved rather than destroyed outright.

She also oversees all alien interrogations and autopsies. In the later stages of the game, she advises the Commander in the use of psionics and observes The Volunteer when he or she activates the Gollop Chamber.

In XCOM: Enemy Within, Dr. Vahlen helps unlock the secrets of Meld and advocates for using the substance to perfom genetic modifications to XCOM's soldiers.

In XCOM 2, Central Officer Bradford will occasionally mention Vahlen, talking about how she went missing, and report picking up "broken transmissions in what could be German", which are implied to be Vahlen.

In the Alien Hunters DLC, it is revealed she managed to escape aboard the Skyranger. She, and a number of other people, stumbled upon an abandoned Alien Genetics Lab, contained three cyrogenically frozen specimens that Vahlen began to genetically experiment on. As a result of her modifications, the specimens eventually became the Viper King, the Berserker Queen, and the Archon King, who eventually broke free and overran the facility. Vahlen's fate afterwards is unknown.

Dr. Vahlen appears in XCOM: Enemy Unknown and is voiced by Moira Quirk as the main research head.

In the novel XCOM: Resurrection, Dr. Vahlen has taken refuge in a sleeping volcano on an icy island where she is conducting further research on live specimens of the aliens. Her efforts are thwarted however when the island gets invaded by ADVENT forces. Whilst Amar and his squad try to fend off the alien forces, Dr. Vahlen activates the self-defense system of the volcano, which boils the aliens in lava. Nothing is heard from Dr. Vahlen after that event.

In XCOM 2, her role has been taken over by researcher Richard Tygan. She is stated to be 'missing', with several clues about what happened to her, such as Lily Shen talking about seeing notes written in English and broken German.

Dr. Vahlen is a major driving force in the Alien Hunters DLC for XCOM 2. After XCOM was disbanded, Dr. Vahlen escaped to a facility in which she studied defect aliens, and performed particularly unethical research; it is apparent in her dialogue during the story mission that she had created or otherwise assisted in the uplifting of the Alien Rulers. After one of her test subjects escaped, the facility had become overrun with Vipers, and all of the facility personnel were presumed killed.

The whereabouts and status of Dr. Vahlen and where she found staff for the facility are unknown. Her voice lines are substituted for Dr. Tygan's during the autopsies of the Alien Rulers.