The EXALT Base Raid is a new mission introduced in XCOM: Enemy Within. This mission serves as the culmination of XCOM's Covert Operations against EXALT and carries a randomized Operation designation.

This mission becomes available once sufficient EXALT Intel has been gathered and the correct country has been identified as harboring the EXALT Base. Although it is possible to guess the country harboring EXALT without narrowing the options down to one, the risk of guessing wrong is that the accused country will immediately leave the Council. Theoretically, the player could guess correctly with no evidence at all, but at that early stage of the game, this mission would be quite difficult. 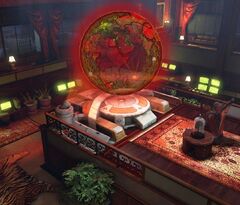 This mission takes place on a new unique map detailing EXALT's penthouse headquarters. The squad is deployed outside, near a helipad, and there are paths that reach around on the outside of the base to the back where some large satellite dishes are located. Windows are plentiful along the side walls, complicating attempts to sneak around back without being detected by the EXALT agents within. An abundance of cover is available both within and outdoors. There is also access to the multilevel roof via several drain pipes; the roof features several skylights that serve as excellent vantage points for shooting into the main rooms.

Inside the base are four main rooms: direct entry to the building can gained through a small foyer; either side of the foyer is from a sitting area and a library (the floor plans are symmetrical); these two rooms wrap around and overlook a large central room with EXALT's own bootleg Hologlobe. The main floor of this room is on a lower level than the other rooms.

The enemy force in this mission consists entirely of 15-20 Elite EXALT agents:

There are no enemies located in the foyer facing the squad's starting point, but there are typically groups awaiting in each side rooms. The rest emerge from the large central room, and the rear of the base (outdoors near the satellite dishes). Unlike other EXALT missions, there are no troops airdropped in during this assault.

Sending a unit to the rooftops allows the player to gain large amounts of information regarding enemy locations through the six skylights; a cloaked unit is advised to avoid the risk of activating multiple groups of enemies.

There are numerous approaches that can be taken to complete this mission. If the squad remains near the starting point, several of the enemy groups will eventually find their way to the ambush, with some mop-up required at the end. Alternately, troops can storm the roof instead to take advantage of the high ground and large skylights. Plentiful cover also permits a full frontal assault. Ultimately, the best tactics are simply to take advantage of the chosen squad's strengths, and player's preferred style.

In place of a typical mission debriefing, a brief cutscene shows the damaged base as audio from a falsified news report is heard:

Completing this mission eliminates EXALT as a threat and reduces panic in every country by one; additionally EXALT cells will no longer appear and the Covert Operations menu is removed from the Situation Room. If there are any operatives currently infiltrating a cell, they will return.

Completing the mission also indirectly provides the player with a reward of §150 (§300 on Easy), as many items acquired after finishing the mission are not researchable and are only useful for selling on the Gray Market:

If the mission is aborted, the EXALT base's host country will leave XCOM.  EXALT cells will still be active, and the base raid can be attempted again.