An EXALT Elite Medic is a new enemy introduced in XCOM: Enemy Within.

An EXALT Elite Medic is a more formidable foe than a standard EXALT Medic. In addition to superior Aim, Health, and Will, they are armed with an EXALT Laser Assault Rifle (equivalent to XCOM's Laser Rifle). They are also genetically modified with Regen Pheromones to increase their healing potential, and possess the Dense Smoke ability.

Regen Pheromones: Heals the medic and all nearby allies within 3 tiles for +1 health per turn. Grants immunity to explosive damage if the medic does not move afterwards. 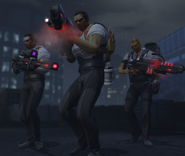 An EXALT Elite Sniper accompanied by an Elite Medic and an Elite Operative
Community content is available under CC-BY-SA unless otherwise noted.
Advertisement