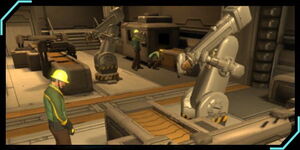 Engineers are XCOM employees who run the Engineering and Workshop facilities at XCOM headquarters in XCOM: Enemy Unknown.

Headed by Dr. Shen, engineers manufacture the various weapons, armors, equipment, and aircraft used by your soldiers. They can also upgrade your equipment once you have built a Foundry. You can tell how many engineers you have by visiting Engineering and looking at the bottom-middle of your screen.

Engineers also reduce the Credit, Elerium and Alien Alloy cost of items by up to fifty percent. This stacks with other bonuses. Adjusted costs can be calculated using the following formula (results are rounded down):  Cost = Base Cost × 0.5 × (1 + (Required Engineers ÷ Total Engineers))