Ethereals (also refereed to as Elders, especially in XCOM 2) are alien commanders in XCOM: Enemy Unknown.

The Ethereals are the psionically gifted, yet physically frail leaders of the alien invasion. Possibly due to extreme age or the energy requirements of their overdeveloped brains, their bodies have atrophied to an alarming degree. Some of their organs are underdeveloped and some sensory organs are not working at all. Despite being physically infirm, they are extremely resilient in combat and their devastating mental abilities can wipe out an entire XCOM squad in short order.

The Ethereals used a combination of mind control and forced evolution to subjugate and mold the numerous races that comprise the alien invasion. Many of the races that XCOM faces were uplifted by the Ethereals and experimented on in order to create superior beings. Ultimately, they were all deemed failures and now serve as shock troops for subsequent invasions.

The first Ethereal is encountered during the Overseer Crash Site mission; if playing XCOM: Enemy Within, it is possible to encounter an Ethereal first during the XCOM Base Defense mission instead. Ethereals replace Sectoid Commanders on any UFO Crash Site or UFO Landing Site mission thereafter. Ethereals are typically accompanied by one or more Muton Elite.

Ethereals are formidable opponents and fighting them should not be taken lightly. Ethereals are extremely durable with 20 health (25 on Impossible), 40 Defense coupled with the Hardened trait (practically giving them permanent full cover), and an innate psionic shielding ability that can reflect shots back at the firing soldier for reduced damage (33% of the original attack)[1] if the shot misses; even Suppressing shots can be reflected. However, explosive damage from rockets and grenades, reaction shots, and Kinetic Strike Module strikes cannot. Ethereals have a standard movement range but their ability to float while moving gives them slightly more mobility than one might expect.

Above all, it is an Ethereal's psionic powers and high Will that makes them most dangerous. Ethereals can easily Mind Control most soldiers (especially ones that ranked up without the benefit of Iron Will training), although they generally seem to prefer the use of Psi Lance or Mind Fray to inflict damage instead. Ethereals also have the ability to drain health from allied units, using it to heal themselves at the expense of their support troops. This ability extends to your XCOM soldiers when mind controlled, so exercise caution when selecting abilities. Their final ability is Rift, which summons a vicious maelstrom of psionic power with a large blast range (5 squares) and high damage potential (up to 20 for units with 0 will); be wary of grouping soldiers too tightly unless they are close enough to the Ethereal that it would risk damaging itself with this ability.

Even in death Ethereals pose a threat, as they release a withering flare of psionic energy upon dying, dealing 4 damage to all units within a small radius and potentially damaging ship components. However, in XCOM: Enemy Within, Ethereals killed with a MEC's Kinetic Strike Module do not explode.

Although an Ethereal's high Will grants it superior resistance to psionic attacks, attacking an Ethereal with Psi abilities isn't impossible. In order to psionically attack an Ethereal, your Psionic soldier will need a Mind Shield, high amounts of Will (e.g. Psi Armor), and a squad right behind them in case something goes wrong. Fighting an Ethereal at its own game is tough, but if you do manage to Mind Control it you will get the "Xavier" achievement as well as knowledge of the Ethereal's abilities, movement range, and defenses in single player mode.

In XCOM: Enemy Within, Ethereals are immune to the effects of Flashbang Grenades. Despite their high Will rating, they can be panicked by using a MEC's Flamethrower on them.

Ethereals cost 10500 points, so they are unusable in ranked matches; however, Ethereals are still powerful units in Multiplayer, especially with their Rift ability, as it does large amount of damage to targets that have a low Will (it also damages robotic units and it kills Cyberdiscs outright). 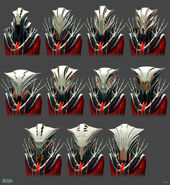 Ethereal in the Alien Containment