The Flamethrower is a Tactical Subsystem for MECs in XCOM: Enemy Within. 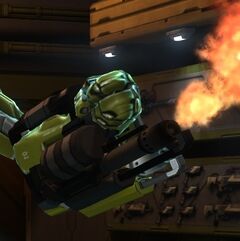 The Flamethrower does 6 damage in a cone-shaped arc that broadens to five tile across by seven tiles deep; the environment is set on fire by the attack and flames may spill outside the damage cone. This attack largely ignores cover (certain angles or structures, like walls, can still block the flames completely) and can cause damaged enemies to panic. The Flamethrower can only be activated twice per mission. Researching the Jellied Elerium Foundry project upgrades the Flamethrower's attack to 9 damage.

When compared with the Kinetic Strike Module (KSM), the alternate Tactical Subsystem of MEC-1, the Flamethrower offers a few advantages:

The Flamethrower's role is two-fold. It can help rack up much-needed kills with the very first MEC. Afterwards, it can be paired with MEC Troopers that are constrained in their mobility, i.e. ex-Supports projecting Distortion Field over standard operatives, or ex-Snipers looking to benefit from Platform Stability. 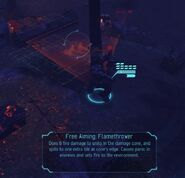 A Flamethrower can be freely aimed and sets fire to anything within the damage cone. 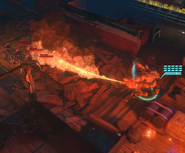 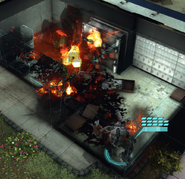 A MEC clears a bank vault of Floaters.
Community content is available under CC-BY-SA unless otherwise noted.
Advertisement