The Floater is an alien in XCOM: Enemy Unknown.

Floaters are monstrous cyborgs powered by pairs of twin back-mounted jets, which give them the ability to hover (gaining a height bonus). This also grants the Floaters the Launch ability, which allows them to fly into the sky and land behind your soldiers' lines.

A Floater autopsy hints that they may be the invaders' incomplete cybernetic and genetic experiments.  They have received extensive mechanical implants, including ones that replace the internal organs. Due to its modifications, there is no distinguishing line between mechanical and biological to describe the Floater. When a Muton Autopsy is complete, Dr. Vahlen noted the similarities between the genetic structure of the Muton and the Floater, lending credence of the alien's experimental speculation. According to the Uber Ethereal, the Floaters were cybernetically modified using Meld after "their organic forms failed to evolve" and the modifications reduced their intelligence, turning them into mindless killing machines.

Floaters first appear during the second month (April), regardless of the game's "Marathon" Second Wave option. Their chance of being deployed declines in June and July (Marathon: from August to October) to a late-game rate on par with Seekers and Sectoids.

The Floater is a low cost unit at 1300 points. They are good at both scouting and chasing enemy units. They are also good against melee unit like Berserkers or Chryssalids because of their ability to fly. Floaters are weak to psionic abilities, making them virtually useless, or worse, detrimental, against psionic units due to susceptibility to mind control.

Their stats are the same as Easy difficulty. However Light Plasma Rifle adds 10 Aim and 10 Critical Chance. It is usually a good idea to have a Floater if you don't have any units to scout the area. 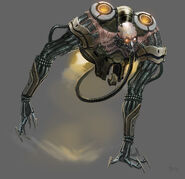 A pack of Floaters

A Floater in the Alien Containment facility