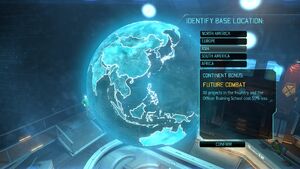 Future Combat is one of five continent bonuses available in XCOM: Enemy Unknown. It is unlocked by either placing XCOM headquarters in Asia at the beginning of a new game, or by placing satellites in orbit over all four Asian countries during the game.

Retrieved from "https://xcom.fandom.com/wiki/Future_Combat?oldid=46000"
Community content is available under CC-BY-SA unless otherwise noted.