XCOM: Enemy Within amends this with:

The production of Ghost Armor opens up a wide range of scouting, spotting, and ambush tactics to the player; its main drawback is that it is expensive to craft.

While not as protective as the Titan and Archangel Armor, the Ghost Armor takes all the tactical advantages of the Skeleton Suit and improves upon them. The movement bonus and the grappling hook provide unlimited use (unlike the Archangel Armor's jetpack) and the +20 Defense bonus effectively turns no cover into partial cover, partial into full, and full into full + 1/2 (60 Defense). Then to top everything off the Ghost Armor has the incredibly useful Ghost ability.

The Ghost ability can be activated up to 4 times per battle; activating Ghost does not cost an action nor end the turn. The Ghost ability's invisibility effectively renders the soldier immune to attack if active during the enemy turn; alternatively, firing while stealthed confers a 100% (reduced to 30% in XCOM: Enemy Within) Critical Chance (unless reduced by a trait similar to Hardened) but will reveal the wearer. Note that using Ghost along with Rapid Fire will confer the critical chance bonus for both shots.

Ghost Armor can serve many different purposes and is even better than it sounds: if a soldier encounters new enemies while stealthed, then ends the turn right next to them, they will NOT respond to the soldier's presence when revealed at the beginning of the next turn (at least until the soldier moves or shoots them).

Spotting for a player's Squadsight Sniper(s) becomes incredibly easy. A team of four ghosted units and two Snipers can clear most maps without giving the aliens a single chance to fire. The same goes for the final boss who can be sniped all the way from the door.

However, note that Close Combat Specialist trigger will break an Assault unit's cloak whether the player wishes it or not, although this quasi-tactic can be exploited for benefit. It can be circumvented by ordering the Assault to Hunker Down.

Soldiers can also ambush the enemy by sneaking behind them and attacking. The enemy will most likely take cover, exposing their backs to the rest of the squad, who can finish them off in the same turn. Therefore, do not shoot with ghosted units the moment they spot the enemy - this will push them away. Instead try going behind them and pushing them towards the rest of the team.

Close-range rush to capture an enemy also becomes infinitely easier: the designated Arc Thrower user can cloak and move into spitting range of the enemy while their squadmates reduce said enemy to low health, not get shot by their target at very short range, and then either successfully stun them during the next move, or have them wiped out by other squadmates if unsuccessful.

Although Ghost Armor is usually associated with the Assault Class, the Heavy Class needs it more urgently. Heavies can use it to get into position quickly and safely, and will no longer fall behind in movement speed and kill count. Snipers can use the grappling hook and stealth system to get into elevated firing positions whilst being undetectable and gain the added critical chance bonus for being stealthed. For Squadsight Snipers on outdoor maps, consider Archangel Armor instead, as it allows them to create their own "nests" instead of seeking out the (few and far between) natural positions, and they rarely need the invisibility feature.

Ghosting is a great way to hit multiple enemies with explosives. Cloak and then rush towards the enemy who are usually huddled close together. Since the soldier is cloaked, the enemy will not 'trigger' and they will not move. This works especially well with Heavy Soldiers since ghosting allows them to get within range with ease.

On time-sensitive missions (e.g. Terror Site, Bomb Disposal, and when looking for Meld Canisters) the player can have one of their units (preferably a fast unit like a Support soldier with the Sprinter ability) ghost and then rush blindly ahead without having to worry about cover. As long as the soldier is not put on Overwatch or equipped with the Close Combat Specialist ability, there is no way the enemy can target that unit. This advancing unit will reveal enemies and items on the map.

While ghosting, using a Medikit on a companion or throwing a Smoke Grenade will not uncloak the soldier, giving a Support more flexibility on how to approach to act.

Although Ghost Mode prevents aliens and EXALT troops from detecting a soldier, civilians to be rescued during Terror and Council missions are unaffected, and will respond to being 'tagged' for rescue as per normal without requiring the soldier to reveal themselves.

There is the issue of decloaking. The suit automatically decloaks either when firing (either manual or Overwatch), using items, Psi Abilities, or at the end of the round, but otherwise remains cloaked throughout the round (note the differentiation between round and turn – one round consists of one player turn and one opponent turn). At the end of the round the suit decloaks anyway, the visual light bending effect will cease, the cloak sound effect will play, you'll get a tactical debuff message/bubble floating off the user, but BE WARNED, the camera will not always jump to that particular cloak user for reference, unlike for example Overwatch.

Class-based differentiation collected into one place. 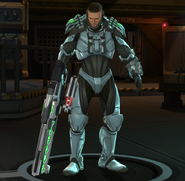 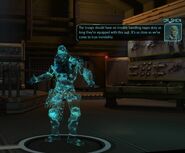 A soldier on the move while in Ghost Mode
Community content is available under CC-BY-SA unless otherwise noted.
Advertisement