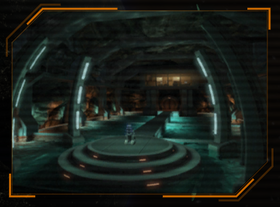 The Gollop Chamber is a facility in XCOM: Enemy Unknown.

The Gollop Chamber is required to interact with the Ethereal Device and make contact with the Uber Ethereal. A soldier with Psionic abilities and equipped with Psi Armor is chosen to become The Volunteer for this task.

Once the Gollop Chamber is activated the final mission becomes available and progression in the game is virtually stopped; no time-demanding actions can be performed, no other missions can be undertaken and all active missions will be aborted (without any consequences).

The Temple Ship Assault mission can be initiated from Mission Control.