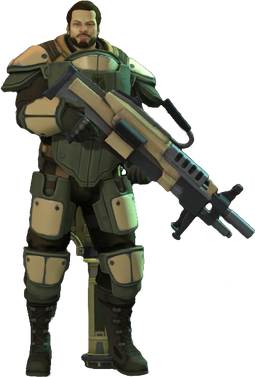 The Heavy Class is a soldier class in XCOM: Enemy Unknown.

The primary role of the Heavy Class is delivering large-scale damage to as many targets as possible, through the use of explosive ordinance or heavy gunfire. It is the only soldier class capable of using the M3 Multi-Role Anti-Armour Anti-Personnel Recoilless Weapon System, which provide high area damage and demolish obstacles.

The Heavy Class is a front line specialist that excels in winning attrition fights with sustained heavy weapon fire from cover. A Heavy has explosives to break up enemy tanks, bunkers, and positions designed to level the playing field if overwhelmed. Heavy excels at destroying enemy cover with explosives. Like the other classes, there are two promotion paths for the Heavy. The left side turns the Heavy into an area-of-effect nuker, whereas the right side focuses on crowd-control utility.

Heavies favor stationary positioning, as key abilities such as firing a rocket may be used only when no movement is made. Always re-position the Heavy behind the most durable cover on the front line, to minimize his need for movement.

The Heavy Class is effective at dealing with both clustered enemies and enemies in cover, either through rocket weaponry or the Suppression ability. Rockets can injure many enemies at once and destroy their cover, exposing them to gunfire from fellow troops. Suppression can be used to lock down would-be flankers and melee enemies and to provide safe passage for squad mates advancing toward enemies in strong cover.

The Heavy Class can be equipped with light machine guns and rocket launchers.

In comparison to the standard rifles used by Rookies, Supports and Assaults, the Heavy's guns are the most terrain-damaging: inflicting roughly 1/4 of the damage dealt by a Frag Grenade against destructible cover (three times more than the Assault Rifle), therefore being the most reliable weapons at the beginning of the game at exposing aliens via gunfire. Their damage within a given tech level is surpassed only by the Sniper's Headshot ability, which is able to inflict comparable critical damage to targets, but with much greater frequency.

When a soldier is promoted, some ranks allow a choice between two abilities.

This article or section is a stub. You can help the XCOM Wiki by expanding it.
Community content is available under CC-BY-SA unless otherwise noted.
Advertisement