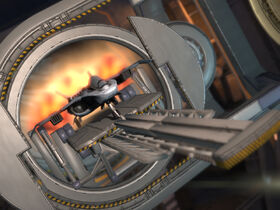 An interceptor is a combat aircraft deployed by XCOM to engage and shoot down UFOs that have been detected by satellites in XCOM: Enemy Unknown. Individual interceptors are stationed in regional airbases and are only capable of launching sorties against UFOs detected over that continent.

The Raven is the initial interceptor type used by XCOM. The game begins with two of these aircraft stationed at XCOM headquarters. Capable of taking down smaller UFOs early in the game, the Raven's speed and fragility become a hindrance when engaging larger, more heavily armed UFOs.

The Firestorm is a robust interceptor that can be developed after obtaining and researching UFO components. A hybrid of human and alien technology, the Firestorm is capable of engaging all alien UFO types.

XCOM's complement of interceptors are managed from the Hangar. Ravens can be purchased directly from the Hangar while Firestorms must be produced in Engineering. Each interceptor is subject to a monthly maintenance cost which is deducted from XCOM's budget (§20 for Ravens and §10 for Firestorms). Aircraft maintenance costs can be reduced by 50% with the Air and Space bonus.

Each continent can station up to four interceptors. They can be transferred between continents, which makes them unavailable for a period of 72 hours (3 days) while in transit.

XCOM's interceptors are equipped with Avalanche Missiles by default. An additional five types of armaments become available as new weapons are researched and produced. Firestorms can be fitted with any of them, while Ravens cannot be equipped with a Fusion Lance. Interceptors are unavailable for combat during the 24 hour period it takes to complete each retrofit.