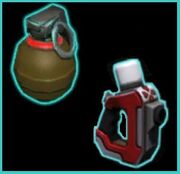 Items are available to soldiers in XCOM: Enemy Unknown via an additional equipment slot that supplements the weapon and body armor slots. Items fulfill a variety of functions from boosting armor HP to specialty roles like healing. Most items become available for production in Engineering upon completion of certain research projects and many can receive upgrades through associated Foundry projects.

All soldiers are capable of equipping themselves with a single item.

The following is a list of all the items available in XCOM: Enemy Unknown.

An alien designed explosive weapon. Does 5 damage to all targets in blast area.

A specialty device designed to capture alien specimens for interrogation.

A protective plating that can be combined with body armor. Adds +4 armor HP and reduces melee damage received by 50%.

A powerful drug cocktail that boosts Soldier performance. Combat Stims increase Will and movement stats and reduces damage received for a limited time.

A human designed explosive weapon. Does 3 damage to all targets in blast area.

A medical device for the healing and stabilization of wounded soldiers. Medikits restore 4 health per use.

A specialty device designed to protect against enemy psionic attacks. Increases Will by 30.

A protective insert that can be combined with body armor. Adds +2 armor HP.

An advanced targeting module that increases Aim by 10.

A tactical weapon used to reduce enemy Aim and Movement by 50% for 2 turns.

A tactical grenade that creates a poisonous cloud that last 1-3 turns, doing damage each turn.

A tactical grenade that confers stealth on all friendly targets in its blast radius for 1 turn. Also increases critical chance by 30% if a shot is taken.

A tactical grenade that attracts aliens within its radius for 2 turns. Enemies already in combat are less likely to be fooled.

A tactical grenade that does 3 damage to all targets in large blast area, but does not destroy cover.

A special device that confers +2 armor HP and provides immunity to poison and strangulation.