Central Officer John Bradford is the Executive Officer attached to XCOM during XCOM: Enemy Unknown and XCOM 2. He reports to the Commander (the player) and often confers with Dr. Shen and Dr. Vahlen. Bradford is frequently referred to by, and answers to, the callsign "Central".

Central Officer Bradford appears is voiced by David Hoffman in XCOM: Enemy Unknown . In XCOM 2, he is voiced by Brian Bloom.

Although not directly referenced, Director Kelly tells Torque that she used to push people away because she had a hard time connecting with people who might not come back from the next mission. She overcame this because "Someone believed in me. And they made time to listen." Torque's response ("You going to start wearing sweaters now?") implies that Bradford is known as a mentor figure and played this role for Kelly.

Within a matter of weeks, XCOM's underground headquarters was infiltrated and destroyed, leaving the organization in shambles. Bradford was apparently left to fend for himself, surviving in the shadows, nurturing a growing affection for distilled spirits. In the time since, he did manage to secure connections within the Resistance, providing the foundation for renewed XCOM operations across the globe.

Having survived the alien assault on XCOM HQ, a broken-down Central Officer Bradford has been living in the fringes for months, using his callsign, Central, as pseudonym. Around 2016, he has fallen in with a few hardy souls doing what they can to survive the spreading alien occupation. The thought of resistance, maybe even rebuilding XCOM, has kept him going and his actions

Though he goes unarmed in XCOM: Enemy Unknown, Bradford is shown to be adept at fighting, as when he is attacked and set upon by a mind-controlled XCOM staff member during Enemy Within, he manages to fight back and incapacitate the assaulting staff member with a pistol. By XCOM 2, he has taken to keeping a knife with him at all times, and he now wields an assault rifle. The fall of XCOM and years on the run has convinced him to carry heavier firepower.

His personality is radically different between the two games. He is a no-nonsense, dedicated officer devoted to the task of defeating the alien invasion in 2015. However, after years of hiding from ADVENT on the edge of civilization, he has become jaded and depressed, even garnering an alcohol addiction in response to the alien occupation. Twenty years of alien occupation have not been kind to Bradford, and it shows in gameplay. While he remains determined to drive the alien threat off Earth, Bradford expresses cynicism about the state of the world and humanity in general. He has developed a sarcastic streak at this point, and is quick to argue and berate others when he thinks they've made mistakes.

When he isn't being a bitter, sarcastic wreck-of-a-man, Bradford often thinks of the old days. He fondly talks of the deceased Raymond Shen and expresses interest in locating the missing Moira Vahlen, and notes that he is happy to see the Spokesman alive and well when he makes his appearance. He alludes to life under the original generation of XCOM, bringing up details like the presence of a single Skyranger in the organization's possession, and his signature sweater, which has since been replaced with a new uniform.

Despite his abrasive attitude, Bradford gets along, in a broad definition of the word, with his fellow resistance operatives. He and Tygan share a cordial, if stiff, working relationship, and his friendship with Lily Shen is almost paternal. He is quick to back the Commander up, no matter what, and is protective of both his men and the civilians in the resistance. While the Avenger is safely landed so the Commander can manage the ship's daily affairs, Bradford is often seen in the presence the soldiers aboard the ship.

By the time campaign begins, Bradford is part of the staff onboard the Avenger. At this point, he has recovered enough confidence in himself to take up arms against the aliens, personally leading the team that rescues The Commander from the aliens. After joyfully welcoming XCOM's original Commander into the new iteration of the organization, he resumes his place as the player's second-in-command.

In addition to serving as the Commander's second in command, Bradford serves as the Avenger's pilot, though his skill is stated to be shoddy at best. Bradford occasionally grumbles about his place in the ship's operation, noting that those who complain never step up to give piloting the ship a try.

In both XCOM: Enemy Unknown and XCOM 2, Bradford is the main person you will interact with. In both games, he will inform you about your missions as you perform them and comment on events in the Geoscape. During missions, he will provide intelligence on objectives, and alert the Commander of additional alien threats.

Throughout XCOM: Enemy Unknown, he expresses an eagerness to learn about the alien threat, but is also concerned for the safety of the troops. He frequently relays his opinions to the Commander, though he is generally respectful to his superior and defers to their judgement.

In XCOM 2, Bradford appears in a majority of the cutscenes, usually accompanied by the Commander. He retains his desire to discover more about the alien threats faced by XCOM, though his commentary on the aliens is substantially more cynical than before. Once aliens considered to be 'successors' to the ones of Enemy Unknown are encountered, Bradford's commentary will reminisce about the now-obsolete version of that given enemy unit. Beyond giving commentary on the alien forces, he tends to be the one to brief the Commander's team on an upcoming mission, and gives regular updates on Avatar Project progress.

In XCOM 2, Bradford personally takes to the field on three occasions. The first time is during the tutorial mission in which he breaks the Commander out of stasis. He appears here as a recruit-rank unit with his signature Multipurpose Combat Rifle, though he only fires it in a cutscene, the rest of his time in gameplay is spent carrying the Commander to safety.

The second is time during the Alien Hunters DLC's story mission where he is fielded as a Colonel-rank Ranger with the Slash, Blademaster, Shadowstep, Run and Gun, Bladestorm, Untouchable, and Reaper abilities. In both appearances, his weapon of choice is his unique "Multipurpose Combat Rifle"; this assault rifle is customized with six Advanced level weapon upgrades: Stock, Auto-Loader, Hair Trigger, Scope, Expanded Magazine, Laser Sights. The Aliens Hunters DLC is disabled BY default in the War of the Chosen DLC.

The third time is in the Tactical Legacy Pack, where he is a fully controllable player unit, accompanied by a squad of fellow resistance operatives. He is a Ranger, wielding the weapons appropriate to the class.

Although present throughout the campaign, Central is only controllable during the Central's Archives Legacy Ops.

Bradford takes up arms during the alien assault of XCOM HQ. 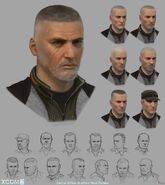 Years on the run have aged XCOM 2's Bradford.

"This is the place." Bradford locates the Commander's stasis chamber. 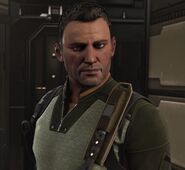 "It's damn good to have you back, Commander." Bradford welcomes you back to XCOM.