The Kinetic Strike Module is a Tactical Subsystem for MECs in XCOM: Enemy Within. 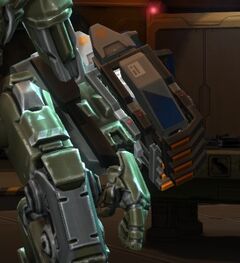 A rocket-assisted punching fist that can perform a free-aiming melee attack that deals 12 damage to enemies or directly destroy cover; the attack can only be performed against adjacent tiles (not diagonally) and may cause some collateral damage to adjacent tiles. Enemies killed by the strike are typically knocked back two tiles; this can cause the corpse to smash through destructible terrain causing further environmental damage and even detonate vehicles. This subsystem also improves the MEC's movement by 2.

The Kinetic Strike Module (KSM) can be upgraded through the MEC Close Combat Foundry project to deal 18 damage. Additionally, the upgraded KSM no longer ends the turn when used as the MEC's first action; this allows the KSM to be used up to two times a turn.

When compared with the Flamethrower, the alternate Tactical Subsystem of MEC-1, the Kinetic Strike Module offers quite a few advantages:

The Kinetic Strike Module is more useful for offensive MECs that readily move to react to threats and opportunities (i.e. based on Assaults and Heavies) and combines well with the Grenade Launcher and Electro Pulse. The movement boost also helps defensive MECs to find the best strategic location to act from (i.e. close to teammates in cover to offer greater Distortion Field effects for MECs based off Supports and optimal sightline positions for Sniper-based MECs). 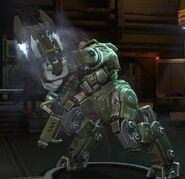 A MEC punching a Berserker
Community content is available under CC-BY-SA unless otherwise noted.
Advertisement