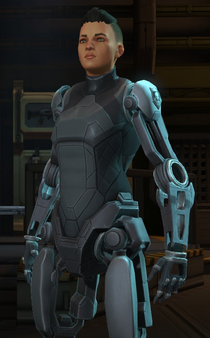 The Mechanized Exoskeletal Cybersuit Trooper is a new soldier class introduced in XCOM: Enemy Within. 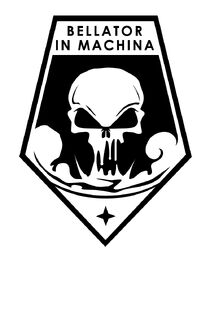 MEC Troopers are not generated at random during Rookie promotion like other class assignments, but are created by augmenting soldiers in the Cybernetics Lab. Rookies and Psionic soldiers are ineligible for augmentation.

Converting a soldier to a MEC Trooper is a permanent class change. They lose their abilities and Gene Mods, but retain their stats, rank and experience. MEC Troopers have stat growth similar to Heavies, so it may be preferable to postpone the conversion of other classes until at the highest rank possible is reached, but there are exceptions:

As part of the augmentation process, soldiers replace their arms and legs with cybernetic limbs known as Base Augments. It costs §10 and

10 to transform a soldier into a MEC Trooper, and they are removed from active duty for 3 days while this takes place. It is possible to augment wounded soldiers, reducing their time out of action to only the time spent in the Cybernetics Lab. MEC Troopers remain human enough to be affected by Psionic abilities, including Mind Control, but cannot be genetically modified or undergo Psi testing.

MEC Troopers do not use the same weapons or equipment available to the other classes but instead utilize Mechanized Exoskeletal Cybersuits in combat. MECs grant MEC Troopers significant health and Will bonuses, access to heavy weaponry and advanced Tactical Subsystems, as well as immunities to fire and poison; they also gain the Hardened trait. MEC Troopers wear their Base Augments when outside of a MEC Suit.

In comparison to the standard rifles used by Rookies, Supports and Assaults, MEC Trooper weapons provide a +2 base damage bonus and a +4 Crit damage bonus. This effectively raises the MEC Trooper's weapon by one tech level (i.e. the damage output of the Minigun matches that of the Laser Rifle); their damage within a given tech level is surpassed only by the Sniper's Headshot ability, which is able to inflict comparable critical damage to targets, but with much greater frequency.

Upon undergoing augmentation, MEC Troopers gain a special inherent ability based on their previous class:

Additionally, MEC Troopers gain experience and ranks conventionally and have their own unique training tree:

When equipped with a MEC Suit, MEC Troopers gain the following trait:

MEC Troopers have the most complex skills and customize builds of any soldier class.

MEC Trooper skills should complement their inherent ability for a common purpose.

Advanced Fire Control is preferred for most cases, and Automated Threat Assessment only in conjunction with Body Shield.

Damage Control is preferred for most cases, due to AIs preference for targets with a high hit probability leading resulting in MEC Troopers often drawing enemy fire.

Jetboot Module vs. One For All[]

Jetboots is preferred for most cases, as clustered units will trigger AI's grenades and Area of Effects.

Expanded Storage is preferred for most cases, due to superior utility and healing options.

Reactive Targeting Sensors is preferred for most cases, due to MECs having very high health pools and the Hardened trait; Absorption Fields only if in conjunction with Body Shield.

Players should be careful with their MEC(s) when fighting psionic foes (Sectoid Commanders, Ethereals) who possess the Mind Control ability. MEC Troopers have no pistol option to switch to, and pack a lot of firepower. Thus, having a Mind Controlled MEC is a highly dangerous proposition, and is made all the more possible by the fact that they cannot equip Mind Shields or be gene modded with Neural Damping. Thus, it may be advisable to augment soldiers with high Will to make Mind Control more difficult.

When a MEC Trooper is at high risk of being Mind Controlled, there are the options of emptying the MEC's primary weapon using Collateral Damage or simply firing at the psionic enemy in question, to deprive the MEC Trooper of some offensive options should it be mind controlled. It may be easier if MEC Troopers simply remain near the Squad Leader (preferably Psionic coupled with Lead By Example) and out of a psionic enemy's Line of Sight until ready to dash in for a kill. The problem can be mitigated by choosing a higher will soldier (above 100) to Augment into a MEC. Then, even if Mind Control is attempted, it would usually fail. It is also highly advised - if not, mandatory - to have a psionic soldier who has Psi-Inspiration to inspire them to further reduce or nearly eliminate the chances of being Mind Controlled.

Using Shaojie Zhang, it is possible to create a very high Will MEC Trooper that exploits Lead By Example. Example: 16 (Iron Will OTS) + 90 Will (Colonel base) + 20 Will (MEC-3 Paladin bonus) = 126 Will total will be boosted for other soldiers.

Absorption Fields ability seems dubious due to the high HP of MECs, but it is very powerful when combined with Damage Control, Repair Servos, a MEC-1 Warden and 6-HP Colonel MEC Trooper. Do not research Shaped Armor. Since this build is intended to deal with late-game heavy hitters - especially the dreaded Sectopod - the Kinetic Strike Module is more useful than the flamethrower. Without Hidden Potential, the only way to get a 6-HP colonel is to use a sniper in Impossible difficulty. A Sectopod's accompanying Drones can damage the Warden faster than the Sectopod itself can, so either capture or eliminate these nuisances quickly.

Use a Sniper as the MEC Trooper base:

The Flamethrower Module with the Absolutely Critical Second Wave option enabled guarantees 9 base damage to enemies, which can be upgraded to 13 by Jellied Elerium.

Use an Assault as the MEC Trooper base:

The Kinetic Strike Module with the Absolutely Critical Second Wave option enabled guarantees a critical hit every time. The punch does 18 damage, which can be upgraded to 27 with two uses per turn by MEC Close Combat.

Using a Heavy as the MEC Trooper base:

The Kinetic Strike Module with the Absolutely Critical Second Wave option enabled guarantees a critical hit every time. The punch does 18 damage, which can be upgraded to 27 with two uses per turn by MEC Close Combat.

Using a Support as the MEC Trooper base:

Skills
Distortion Field, Automated Threat Assessment, Vital-Point Targeting, Jetboot Module, Expanded Storage, Reactive Targeting Sensors
Equipment
Flamethrower, Restorative Mist, Proximity Mine Launcher
Upgrades
Advanced Servomotors, Jellied Elerium, Shaped Armor
Tactics
MEC Trooper supports allies by provoking enemy fire. Nearby allies should be in cover and distorted. Concentrate fire on higher threat targets, while leaving the MEC's squadmates to take care of the weaker enemies before aiding the MEC. Only use this MEC if you need a tight squad. You will be able to take out Chryssalid "Zerg rushes" with flamethrowers.

The Flamethrower Module with the Absolutely Critical Second Wave option enabled guarantees 9 base damage to enemies, which can be upgraded to 13 by Jellied Elerium. 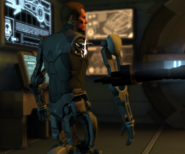 A MEC Trooper receives his Base Augments.

A MEC Trooper watches construction of a MEC in the Cybernetics Lab.

A MEC Trooper in a MEC, about to punch a Mechtoid with a Kinetic Strike Module.
Community content is available under CC-BY-SA unless otherwise noted.
Advertisement