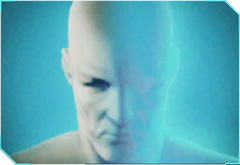 Mimetic Skin is one of the Gene Mods in XCOM: Enemy Within.

Confers the ability to change skin pattern to match cover. When a soldier moves to high cover, enemies without special abilities will not target soldier. Does not work if any enemies have line of sight to the soldier's starting position. Leaving cover or firing will break this concealment.

This Gene Mod becomes available in the Genetics Lab after completing the Seeker Autopsy research.