Mind Control's success rate is, like all psi powers, only reliant on the Will of the target and the psionic, and completely ignores physical cover, distance, and elevation, provided that Line of Sight is maintained. So the lower the target's Will (or the higher your unit's), the higher the chance will be to successfully control the target. Towards the end of the game, consider putting on Mind Shields and Psi Armor to increase your soldier's psionic defense and offense.

Mind Control has a 5 turn cooldown.

A soldier that becomes Mind Controlled by a Sectoid Commander or an Ethereal will retain all abilities they had before being possessed and should be considered a severe threat to the remaining squad members in the field. There are a number of ways to neutralize a Mind Controlled soldier: 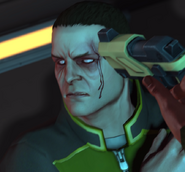