The Muton is an alien in XCOM: Enemy Unknown.

Standing over 2 meters, this humanoid creature is physically powerful and aggressive, but mentally weak. They appear to be the least intelligent and very vulnerable to psi-attacks. However, studies showed that their memory is imprinted with high amount of knowledge in combat tactics and weaponry. Furthermore, based on autopsies, it is clearly evident that the Muton is genetically designed and modified for combat. As such, one must take great care not to underestimate the capabilities of the Mutons.

Due to these attributes, the Mutons are highly suited as the invaders' front-line combatant and can withstand high amounts of damage and have increased tolerance to pain due to their genetically enhanced physiology.

Mutons first appear during the third month (May) equipped with Light Plasma Rifles, or June if the "Marathon" Second Wave option is enabled. They are upgraded to standard Plasma Rifles the following month on Classic and Impossible difficulties, or two months later on Easy and Normal. Their chance of being deployed declines in August (Marathon: December). Certain missions, such as Slingshot's Friends In Low Places, may temporarily introduce this enemy before it is deployed regularly.

Mutons will try to strike fear into enemies by seeming to dismiss near-fatal blows. They also have the "Blood Call" ability that motivates surrounding Mutons. Never try to fight one hand-to-hand. 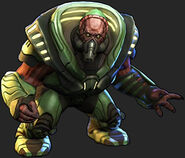 A Muton is a dangerous enemy

A Muton armed with a Plasma Rifle

A dead Muton
Add a photo to this gallery
Retrieved from "https://xcom.fandom.com/wiki/Muton_(XCOM:_Enemy_Unknown)?oldid=46031"
Community content is available under CC-BY-SA unless otherwise noted.