The Muton Elite is an alien in XCOM: Enemy Unknown.

Muton Elites resemble standard Mutons in appearances and physiology but the similarities end there. Physically stronger, the Muton Elites are also equipped with a heavier and more regal armor and Heavy Plasma cannons; Elites also tend to show greater intelligence and coordination than their ordinary counterparts. Muton Elites are smart and capable squad fighters that are not likely to be taken down easily.

Muton Elites primarily maintain a guardian role, regularly protecting any Ethereals present among the alien forces. With such physical and mental capabilities, Muton Elites are a force to be reckoned with and extreme measures should be taken when faced with this foe.

Muton Elites first appear during the seventh month (September), or February 2016 if the "Marathon" Second Wave option is enabled. After their introduction, they're a common sight in Alien Abductions and both kinds of UFO missions, but will not appear on Terror Site missions. 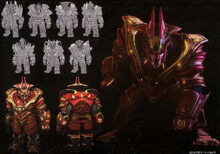 A pack of Muton Elites

The autopsy of a Muton Elite