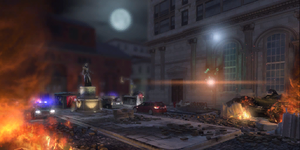 Operation Devil's Moon is a mission for XCOM: Enemy Unknown. This unique mission serves as a tutorial for new players and, unlike normal missions in the game, is entirely scripted; the soldiers, enemies and overall outcome are always the same (including the death of three of the squad members). This mission takes place in a random city in Germany (Berlin, Cologne, Hamburg, or Munich); the mission is the same in all cities.

By default this mission will be the first mission played when starting a new game unless selecting to play on the Impossible game difficulty or disabling the tutorial via the main menu options.

This mission uses a unique map consisting primarily of a German street littered with wrecked and abandoned cars and the warehouse space or boiler room of the large building at the end of the street.

Only three Sectoids will be fought in the course of the tutorial though a Sectoid Commander is encountered via a cut scene.