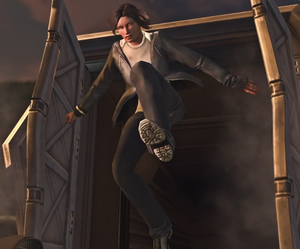 Operation Progeny is a set of linked Council Missions included in XCOM: Enemy Within. The missions take place in France and introduce a new playable character, a woman named Annette who joins XCOM as a psionically gifted soldier.

Like Operation Slingshot, it can be enabled or disabled separately in the game's start up menu. XCOM will face off against the aliens in all the missions; narratively the missions involve all three factions in XCOM: Enemy Within and even have a tie-in with the XCOM Base Defense mission.

If enabled in the game's advanced options menu when beginning a new campaign, the first Progeny mission, Portent, occurs sometime in April. It involves XCOM finding an injured survivor of an attack on a French military convoy and escorting the man to the extraction zone for interrogation; it's later revealed that this survivor is a member of EXALT. If also enabled, the first Operation Slingshot mission, Friends In Low Places, will be offered shortly following Portent.

The remaining two missions of Operation Progeny will not become available until after XCOM assaults the Alien Base and the aliens' retaliatory attack against XCOM headquarters. Once offered, the next mission, Deluge, is set on a damaged hydroelectric dam where XCOM's soldiers fight their way to a disabled transport truck. Finishing the mission triggers a cut scene where Annette springs from the the back of a truck and tries to flee by demonstrating a psionic ability that staggers the XCOM troops. However after looking at the destruction around the dam and realizing XCOM's capacity to fight the aliens she urges them to save her friends. Following the mission, Annette can then join the ranks of XCOM (Sergeant rank, class is randomized) and will be Gifted if tested in the Psionic Labs.

The final Operation Progeny mission, Furies, is offered the following month. XCOM attempts to rescue Annette's friends who are being kept captive inside an alien ship hidden in the French Alps. As XCOM's squad enters the ship, an alarm is triggered and the team is required to locate and destroy the control panel for the captives' stasis pods within 12 turns; failing to do so results in the abductees being euthanized. Saving them in time results in the three captives also joining XCOM's ranks. All three soldiers, like Annette, are guaranteed to be psionic though they must still be tested in the Psionic Labs before they are able to use psionic abilities.

Following the rescue mission Dr. Vahlen explains that the reason why EXALT and the aliens were interested in Annette and her friends was that they were able to amplify the psionic abilities of others. With this power the abductees aided the aliens' invasion of the XCOM base by boosting the aliens' psionic strength, allowing for the mass mind control of XCOM personnel without even being in the vicinity. However due to brain trauma, none of the former captives will ever be able to demonstrate those unique psionic powers ever again, but are still eligible to learn the general psionic abilities.