General Peter Van Doorn is a VIP target for extraction in XCOM: Enemy Unknown, and returns as an XCOM Hero in XCOM 2. 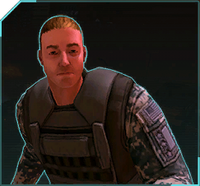 Reports indicate an UN official and his associates were caught in the middle of an alien attack in [COUNCIL NATION]. If this official is killed or abducted by the aliens, it would undoubtedly spread panic and reduce the effectiveness of XCOM. We need a squad of your soldiers to escort the target safely to the extraction point.

The mission takes place in the Highway Fallen map, and Van Doorn is located by the red SUV on the fallen segment of highway.

If the player's campaign lasts longer than two in-game years, the Van Doorn extraction mission can be completed a second time. 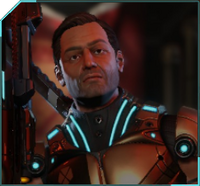 Peter Van Doorn returns as a member of XCOM in XCOM 2. By 2035 he appears older, and has two full sleeve tattoos, displaying his loyalty to Earth and XCOM.

In order to recruit Van Doorn, the Commander must rename an existing recruit 'Peter Van Doorn.' This will then add him to the playable roster. He appears as a high-ranking, fully-equipped XCOM Ranger, with a unique character model. This will disable achievements, as he is considered an XCOM Hero; however, he can be saved to the character pool, which will allow him to appear in any campaign depending on the character pool's settings, and retain his unique appearance.