The Psionic Class is a special sub-class for soldiers in XCOM: Enemy Unknown.

Soldiers belonging to any of the principal four classes can access the abilities of this sub-class in addition to the abilities of their base class; however these psi-abilities only unlock for soldiers who possess "The Gift" which is determined by testing in the Psionic Labs. If a soldier unlocks this sub-class, his/her class icon will gain a purple hue to indicate that they are psionic.

Psionics retain the weapon load-outs of their base class.

In XCOM: Enemy Within, the following medals provide added Will bonuses that help boost to psi attacks and defense.

Rank progression for Psionics is determined by experience specifically gained through the successful use of their psionic abilities instead of general combat experience. The three ranks that Psionic soldiers progress through are: Psi Adept (conferred upon successful psionic testing), Psi Specialist, and Psi Operative.[1]

When promoted past the rank of Psi Adept, Psionic soldiers are granted a choice between two psionic abilities.

The primary role of the Psionic Class is mental domination of the battlefield, sapping the enemy's will to fight and ultimately even turning enemy troops against themselves and their allies.

Psionics with low Will are generally better off taking "defensive" abilities on the left side of the ability tree, as the more offensive skills on the right side require a high Will to be successful in most situations.

Offensive abilities do neglect cover and elevation, also distance in a way that a normal rifle range is required to initiate it, but it won't suffer penalties to aim if at longer ranges. Also, targets only visible with Squadsight ability are interestingly not in Psi range.

A Psionic soldier on the battlefield 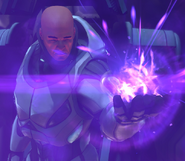 A Psionic soldier in Titan Armor