Medium
The Railgun is a new MEC Trooper-only weapon in XCOM: Enemy Within.

The Railgun becomes available for production in Engineering after completing the Heavy Lasers research. 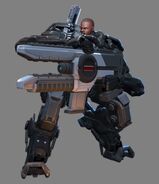 Concept art of a MEC armed with a Railgun.