The S.H.I.V. (Super Heavy Infantry Vehicle) is a weapons platform in XCOM: Enemy Unknown that can be manufactured in the Engineering Lab. S.H.I.V.s can be deployed as substitutes for human soldiers on missions and require a space in the XCOM HQ barracks. 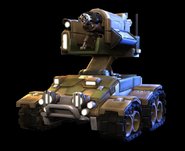