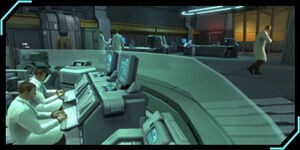 Scientists are employees of XCOM in XCOM headquarters' Laboratories in XCOM: Enemy Unknown.

Headed by Dr. Vahlen, scientists perform valuable research that allows your Engineers to build different weapons, armors, equipment, aircraft and facilities. You can tell how many scientists you have by visiting Research and looking at the bottom-middle of your screen.

Research time is based upon a system of points in which one scientist generates one point per day of work until the required total is reached. Research credits reduce the total point requirement. Researching Beam Weapons (120 Points) with the stock 5 scientists will take a total of 24 days. This is reduced to 12 days (60 Points) after the Beam Weapons Credit is obtained. Moving from 5 to 10 scientists will reduce the initial 24 day research time to 12 days, and adding the credit brings it to 6 days. It will take 6 days for 10 scientists to generate the 60 points required to complete research. Research points are not carried over between projects, but the points accumulated will remain if a project is changed before completion. For example, leaving Weapon Fragments with 35 of 40 points will keep it at that even if a separate research project is started and completed.

The more scientists you have, the quicker research completes. You also required to have a certain number of scientists on staff when building Laboratories. Scientists are never "consumed" when they are required for something.