For alternate versions of this enemy in other XCOM games, see Sectoid.

The Sectoid is the first alien enemy encountered in XCOM: Enemy Unknown.

Sectoids are weak and die quickly against experienced soldiers, but are still dangerous early in the campaign. They are usually found in groups of two or three, alongside other enemies like Thin Men or Floaters. They are intelligent enough to use cover and flanking tactics, unlike some aliens. As the campaign progresses, they are largely phased out in favor of more dangerous foes.

According to autopsy reports, their unusual structure suggests that Sectoids are genetically manipulated and their identical genetic info implies that they are cloned.

They also posses the ability to Mind Merge with one another, increasing their health and combat effectiveness. However, one of the large downsides to this ability is if the Sectoid that initiates the Mind Merge dies, the other linked alien soldier dies as well.

Sectoids are the first enemies to appear in the game. Their chance of being deployed declines from April to July (or April to October if the "Marathon" Second Wave option is enabled), however this is partially negated by supplemental Sectoids that escort Mechtoids beginning in June (Marathon: August). Sectoids can be deployed for most mission types, but are not encountered during Terror Site missions. 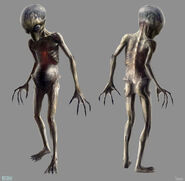 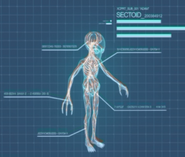 A Sectoid autopsy
Community content is available under CC-BY-SA unless otherwise noted.
Advertisement