The Sectopod is an ADVENT enemy encountered in XCOM 2.

The Sectopod is a large bipedal robotic combat unit used by ADVENT. It is a towering weapons platform capable of destroying terrain as it walks, with a size of 9 tiles. The Sectopod provides overwhelming firepower where it is needed most.

According to dialogue, the aliens used these units to wipe out humanity's conventional militaries during the invasion. 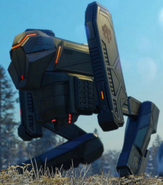