Edit
watch 01:20
XCOM: Enemy Within - War Machines Trailer
Do you like this video?
Play Sound

A Seeker is a new alien enemy introduced in XCOM: Enemy Within.

The Seeker is a flying squid-like robotic unit. Capable of cloaking themselves (for a limited number of turns), the Seekers utilize a brand new AI that focuses on hit and run style attacks. Seekers will appear in pairs and when initially spotted are more likely to run and hide, only to reappear after your squad has engaged other enemy units. Despite being triggered in pairs, Seekers largely act individually (i.e. can strike during different turns) and have a preference for attacking isolated units (like Squadsight Snipers).

Seekers first appear during the second month (April), regardless of the game's "Marathon" Second Wave option. Their chance of being deployed declines over the following three months (Marathon: five months, from June to October), to a low rate on par with Sectoids and Floaters. Seekers can be deployed for most mission types, but are not encountered during Terror Site missions.

It is worth noting that Seekers can engage Flight, allowing them to rapidly access rooftops where other ground units can't easily reach them; they also gain the Evasion ability when they enter Flight. Seekers are revealed when they attack a squad member and as they often cloak upon first contact it is usually the first time the player will see one after first contact. By keeping the squad tightly 'packed' after contact the player can allow soldiers to cover one another. Ideally every squad member will be within a 6x6 area of two or more friendlies and all will be on Overwatch. This strategy allows the player to sit tight and wait for an attack, when a soldier is inevitably assaulted the Seeker will be revealed and the squad will open fire. However, it is worth noting that this tactic is best employed when only Seekers have been triggered, the tactic relies on the Seekers being the first target after ending the player's turn. This tactic is particularly prone to a 1-2 attack where the first Seeker attacks, everyone fires their reaction shots and then the second Seeker can attack without being shot (unless there is a Support with the Sentinel ability in the team or an Assault with the Close Combat Specialist ability within 4 tiles).

The following tactic allows the Seekers to be dealt with by a single squad member, allowing the rest of the squad to focus on other enemies: An Assault, equipped with a Shotgun and the Close Combat Specialist ability, and sent near where the Seekers were spotted, will be able to kill both potentially in one turn. Because the Close Combat Specialist ability has an unlimited number of uses per turn, both Seekers can be shot with high accuracy in one turn when they uncloak to Strangle the Assault, and the Shotgun is likely to kill them in one hit. This tactic can be further enhanced with the Bioelectric Skin gene mod (allowing you to see the Seekers from further away and thus having more chance to kill them) and by using a Scatter Laser or something heavier, rather than a Shotgun (as it will consistently kill the Seekers in one shot). The two weaknesses with this plan is that the Assault's ammo may run out, the Shotgun may not kill the Seeker in one hit, or the Seeker targets a squad member out of range of the Assault.

It only takes one hit with any weapon to cause a Seeker to stop Strangling a teammate. However, it is best to deal the Seeker a killing blow while it is still attached as Seekers become significantly harder to hit when flying/floating.

Seekers can be damaged while in Stealth mode (e.g. with explosives), but mostly leave their last position directly after cloaking. A player can occasionally locate a hidden but non-flying Seeker by spotting a nearby grid square that can't be moved into by a soldier. Using any area-effect weapon or a MEC's Kinetic Strike Module against the square can easily damage or kill the hidden Seeker. Wounding a stealthed Seeker will immediately decloak it, though if it is killed out right, a Seeker's corpse may remain invisible.

Seekers will always move towards the squad after being spotted; however, if one can properly estimate their position, a Proximity Mine can be planted near where they are predicted to be or where they will most likely move. Seekers in stealth will still trigger Proximity Mines, making it a good means of protection against them.

Another tactic is to have a Sniper toss a Battle Scanner in the area where the Seekers initiated their stealth. This will immediately break the stealth of any Seekers in the radius of the scanner.

A Seeker cannot cloak indefinitely and after a number of turns will eventually be forced to decloak. If a Seeker considers its prey too well defended, it might just decide to not attack at all in any way eventually decloaking and becoming a sitting duck; however this might just be a bug, not a real stalemate behavior.

The ranged weapon is rarely used, mostly just on occasions when a Seeker cannot find a viable target to strangle, if it sees any MEC or S.H.I.V. that's immune to it, a Seeker may choose to fire upon it. Under same circumstances they can also enter Overwatch with their ranged weapon, shooting even normal enemies which are not immune to Strangulation.

An very easy tactic for at least revealing the Seeker is to throw a needle grenade, with its vicious range they are almost bound to hit one, this tactic works 100% so far with documented attempts to do this. 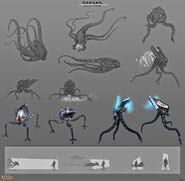 A pair of Seekers activate Stealth.

A Seeker strangles a soldier.
Community content is available under CC-BY-SA unless otherwise noted.
Advertisement