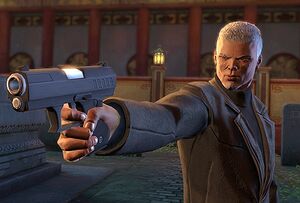 Shaojie Zhang is a Triad Operative and Council contact who is introduced as part of the Slingshot Content Pack for XCOM: Enemy Unknown. He is the VIP that must be extracted during the mission Friends In Low Places, and joins XCOM following his rescue.

Zhang is of Chinese origin with cropped white hair and goatee. He has a scar over his right eye and another on his right cheek. Zhang features his own distinct voice and personality. His nickname, 'Chilong', means "Crimson Dragon". [1] This is referenced in his titular Achievement, "Rising Dragon".

If Zhang is killed during his introductory mission, that mission will later be offered again. His powers of "re-incarnation" falter once recruited. (In XCOM: Enemy Within, Zhang's death during the first mission will terminate the entire Slingshot campaign.)

Shaojie is different from other soldiers, in that he has 9 HP upon joining XCOM as a Heavy class Lieutenant regardless of the game's difficulty setting. Although only one point more than a regular Heavy Lieutenant on Easy, his HP becomes more significant at higher difficulty levels, on account of his HP being unaffected by difficulty (on Impossible a standard Heavy Lieutenant has 5 HP compared to Zhang's 9). He gains two additional points while rising through the ranks, finishing with 11 HP at Colonel.

Zhang joins XCOM with 75 Aim, equal to a Colonel-ranked Heavy despite being three ranks lower. He gains five points while rising through the ranks, finishing with 80 Aim at Colonel. He also starts with 70 Will, which gives him an excellent chance of having the Gift. He can reach a maximum of 88 Will at Colonel, or 106 Will if leveled-up with the Iron Will OTS upgrade.

These traits make him an extremely desirable candidate for:

The following dialogue is spoken by Zhang during Friends In Low Places:

Zhang also has a number of unique responses to various scenarios during combat, such as when he requires a weapon reload, goes into Overwatch, or spots an alien.

Shaojie Zhang appears in XCOM: Enemy Unknown and is voiced by Feodor Chin. 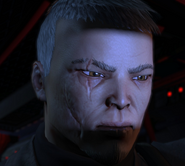 Zhang can be Gifted

Zhang in his dress uniform receiving a medal