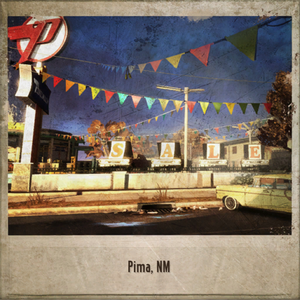 Signal From Beyond is a main storyline mission in The Bureau: XCOM Declassified. The Bureau receives an SOS signal from Pima, New Mexico. This is the last known whereabouts of Agent Nico DaSilva and his team before they went dark for two days. You are sent to investigate the signal and locate DaSilva's team.

You will automatically receive this mission from Director Faulke after Interrogating the Alien at the XCOM base.

The mission begins with Agent William Carter and squad being dropped off in the middle of a town. The mission is divided into two parts.

The first part of the mission is to locate Agent DaSilva and his team.

The second part is to destroy the Outsider outpost.

The mission begins with Agent Carter and his team being dropped off in a town in Pima, New Mexico.

During Meet with DaSilva there will be a choice.

The first choice is to let the near sleepwalker DaSilva kill himself while also killing enemies.

The second choice is to convince DaSilva that he can still aid humanity by letting XCOM scientist perform test on him in order to find a cure of the sleepwalker virus.

This part begins with Agent Carter and squad leaving DaSilva in order to destroy the enemy outpost.

Retrieved from "https://xcom.fandom.com/wiki/Signal_From_Beyond?oldid=32995"
Community content is available under CC-BY-SA unless otherwise noted.