Site Recon is a new type of Council Mission introduced in XCOM: Enemy Within. There is only one Site Recon mission, a special mission to investigate a fishing village in Canada.

This mission is offered following XCOM's first encounter with Chryssalids (typically a Terror Site mission) during the game's first playthrough, and becomes part of the random pool of Council Missions in subsequent playthroughs. It is initiated by a Council transmission received at the Situation Room:

This mission plays out on a large new map which details a portion of the fishing village's docks and market area. As the squad investigates they will first encounter Zombie villagers and then Chryssalids who have mysteriously overtaken the town. Advancing along the docks, the squad will come upon a large wrecked ship that appears to be the source of the alien infestation. Boarding the vessel, the squad discovers the Chryssalids have turned a whale carcass into a breeding hive. Upon the whale corpse being revealed, a new Chryssalid will burst from it each turn; prior to and after this event, solitary Chryssalids may also be encountered erupting from sharks or large fish hanging on the docks or aboard the boat. 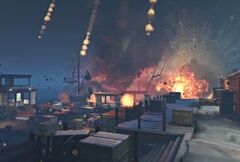 With the source of the infestation identified, the squad is tasked with turning on the ship's transponder (located on the ship's bridge) so an airstrike can eliminate the threat. Once the transponder is activated, the squad will have 8 turns to reach the evacuation zone before the airstrike hits. To further complicate matters the number of Chryssalids that burst from the hive increases as time goes on to as many as three at once. If the airstrike timer expires, any squad members in the EVAC zone will survive, while anyone outside the zone will not.

The following status updates are received from Central Officer Bradford during the mission: