The Skeleton Suit is a type of body armor in XCOM: Enemy Unknown.

Using the Grapple counts as one move for the purposes of expending available actions and allows XCOM soldiers to benefit from otherwise inaccessible elevated locations such as structural archways, rooftops or mountainous terrain.

This feature is useful to gain a high-ground bonus in accuracy, cover slightly greater distances, flank the enemy and especially to approach (or escape) enemy units using Overwatch or Suppression, as this movement type stands alone in bypassing all reaction fire triggers entirely (making it even more worthwhile in this regard than Lightning Reflexes which is limited to negating only the first shooter's attack).

Furthermore, when considering the visible-enemy movement rules of the Mimetic Skin modification in XCOM: Enemy Within, grappling while stealthed yet in view of one or more enemies will reveal the cloaked soldier as expected – but only after the grapple has completed, meaning that there are quite a number of situations where an otherwise 'stranded' soldier might escape undetected (typically to an overhanging roof rather than out-of-sight-radius, though the latter is sometimes possible).

Choosing the grapple option will display nearby tiles on high ground that can be targeted - the unit does not need to be directly under the desired tile. In fact, depending on the vertical distance, standing directly next to a desired high ledge to grapple on makes the soldier unable to do so because of the uncomfortable angle.

Skipping Carapace Armor for the Skeleton Suit is a viable and advantageous strategy in most scenarios, as the latter not only costs 5 less Alien Alloys than the former but the improved mobility options and Defense bonus ultimately increase the average squad's survivability much more significantly than its predecessor's incrementally higher health bonus. Such tech skip, however, might not be viable/advisable during games when the "Marathon" Second Wave option is enabled or when heavy casualties are sustained and survival becomes a priority.

Either due to a bug or not, the left arm grapple extension is not worn by Gene Modded soldiers traveling to a mission in the Skyranger. This is also the case with the Ghost Armor which has the same grapple extension ported over. 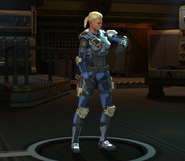 An Assault soldier checks out her new Skeleton Suit.

A soldier in a tinted Skeleton Suit shows off her grapple hook.
Community content is available under CC-BY-SA unless otherwise noted.
Advertisement