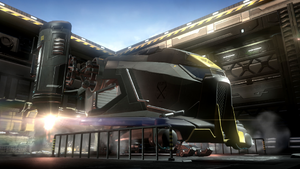 The Skyranger is a Vertical Take-Off and Landing (VTOL) troop transport aircraft utilized by the reborn XCOM in XCOM 2. The successor to the original model fielded by the first incarnation of the organization, this new variant of the vehicle transports the player's squad from the Avenger to and from mission sites.

Unlike XCOM's original Skyranger, which had variable-sweep wings and fixed vertical thrusters, the new craft relies on swiveling engines on either side of the fuselage to provide all the lifting power, in addition to the large main forward thruster. This results in a much slimmer vehicle overall. However, the new Skyranger has never been observed to conduct intercontinental sorties like its predecessor, and seems to be dependent on the Avenger for long-distance travel. On the other hand, it appears to be able to outrun or evade ADVENT interceptors, a problem its predecessor didn't have to deal with.

The new Skyranger has cable reels for the squad to rappel down on, and is also capable of reeling them back from the ground. It also has a cargo winch under the loading ramp, presumably for external cargo carriage. As shown in several cutscenes, the vehicle is resistant to small-arms fire at the minimum, though its lack of armaments prevents it from acting in an aerial combat role.

The only observed Skyranger is flown by a female pilot with the call sign Firebrand.

Retrieved from "https://xcom.fandom.com/wiki/Skyranger_(XCOM_2)?oldid=47313"
Community content is available under CC-BY-SA unless otherwise noted.