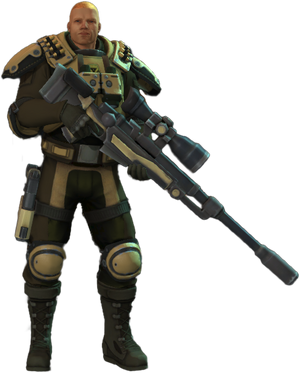 The Sniper Class is a soldier class in XCOM: Enemy Unknown.

The primary role of the Sniper Class is providing long range standoff, force multiplier and supporting Overwatch against enemy units. Their ability to precisely place a round where needed greatly enhances the survivability of the squad, reduces collateral damage, and increases mission success.

The primary role of the Sniper Class is to devote special attention to the military coup d'œil, to quickly kill high-valued targets, and to dispose of retreating or flanking hostile elements. Every "kill confirmed" alien directly translates into one less -dead- XCOM soldier. The unique characteristic of the class is the focus on long range combat: unlike other weapons, sniper rifles have greater accuracy at long distance, and suffer reduced accuracy (up to 25%) at close and mid range.

The Sniper class can be equipped with sniper rifles and pistols. They tend to rely on their pistols as backup weapons more often than any other class, so they should be the first to receive upgraded pistols.

When a soldier is promoted, certain ranks allow the player to choose one of two abilities for the soldier.

This article or section is a stub. You can help the XCOM Wiki by expanding it.
Community content is available under CC-BY-SA unless otherwise noted.
Advertisement